Guess what?! I didn’t write this article! My husband did 🙂 He had been wanting to write a post about driving in France since we last went in summer 2014 and he had to learn how to drive…not only on the right-hand side of the road but some rules may be confusing to you (at least if you are Australian).

Driving in France started as a scary experience!

The first time my husband tried driving (= conduire) in France, we decided to borrow my mum’s car and just drive around the block for him to get a first feel of the car. I was in the back seat (le siège arrière), my brother was in the passenger seat (= le siège passager) . We got scared straight away as the car started to go down the street while rubbing along the kerb (= le bord du trottoir) – it was not easy for my husband to assess his position on the road-, windscreen wipers (= les essuie-glace) on because the wipers and indicator (= le clignotant) commands are inverted. As we approached the nearest intersection, my brother and I were both yelling “Priority to the right! Priority to the right!” – which we learnt afterwards my husband had no clue what we were saying… (we meant “give way to the right”, whatever the layout of the intersection is). Phew!…
So, we found it useful to share with you some of the main differences that you may not be aware of while driving in France:

1. Driving on the right

Just remember that in France people drive on the right! The steering wheel (=le volant) is on the left hand side of the car, so you need to shift gears (= changer de vitesses) with your right hand. This was very hard for me to get my head around at the beginning as we drive on the left here in Australia, with the steering wheel on the right hand side of the car.

As a general rule, rental cars (= voitures de location) in France are manual, or stick shift. If you are not familiar with driving a manual car, it would be highly recommended for you know how to drive a manual car before you consider driving in France. Automatic cars are not that common and can be significantly more expensive to rent. 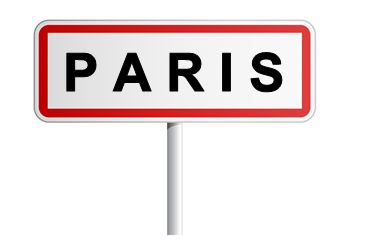 Unless stated otherwise by a speed limit sign (=panneau de limite de vitesse), you need to remember the rule by default:

Roundabouts work slightly differently to how we are used to in Australia.

That’s why driving around the Arc de Triomphe in Paris is a nightmare and there are so many accidents: it’s an 8-lane roundabout with no visible lanes painted on the ground! 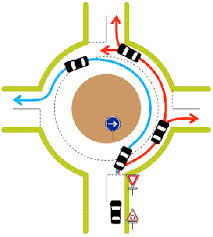 How to survive a French roundabout

Imagine this: you’re driving on a straight road and approaching an intersection. You’re not facing any stop sign or give way sign nor traffic lights (= feux de signalisation).
In Australia, we go into autopilot mode and just drive on.
But in France, if a car comes out to your right, you need to give way to them! The car that is on your right will not even think twice and just drive straight out because THEY have right of way (= la priorité). Fortunately this mostly only happens in small towns, where no priority is marked (i.e no paint, no sign). In most intersections, there will be a road sign or a painted mark on the floor indicating who has right of way, who is facing a stop (hard thick painted line) or a give way (dotted line or “Cédez le passage” sign).

Try to avoid trying in the larger cities such as Paris, Lyon and Marseille. It’s just chaos in some of these cities.
For example in Marseille, some of the roads look like cobbled foot path, and it’s extremely confusing to work out what is a foot path and what is a road there for some of the streets…
If it’s going to be your first time driving in Europe or first time driving on the right. Then the best tip that I could give you is to hire your car in a small quiet town and practice there first. So if you mess up at least there won’t be tons of traffic and complications arounds.
That’s what we did: our journey started in Marseille, but we didn’t rent the car from Marseille. Instead, we took the train to Aubagne, a smaller and very picturesque town only minutes from Marseille. We rented the car there.
Some of the country roads in France are tiny and can hardly fit two cars compared to Australia. I was trying to stick to my own lane on these roads and everyone in the car would panic cause it feels very close to the edge of the road, and it was even harder to maintain the speed of 90km/h while doing this. The tip that I’ve learned is that on a long stretch of road where you can see the on coming traffic, it’s ok to drive more in the middle of the road. But make sure you pay attention to on coming traffic!

Good Luck and keep safe while driving in France!

Thanks my hub for your article! And thank you for driving the two of us around in France, safely. I had a wonderful time showing Provence to you and reconnecting with childhood memories…
Share below your experiences of driving in France, and maybe your tips if you can think of more!

By popular demand, I’ll record some episodes to help you learn or recognise common French slang expressions. As you may know, the French you learn in the classroom and the French you hear in the street or in the movies can sometimes sound quite different ! If you enjoyed this episode, you may also find… END_OF_DOCUMENT_TOKEN_TO_BE_REPLACED