Ah, French verbs! They’re the nightmare of most students of French! By popular demand, here are some of my best tips if you’re feeling lost with how to conjugate French verbs in –IR.

Good news: you only need to learn the indicative present tense and the past participle forms! All other tenses can easily be made from them ; refer to my article “The 7 Most Common French Tenses Made Easy” (it includes a downloadable worksheet with exercises). 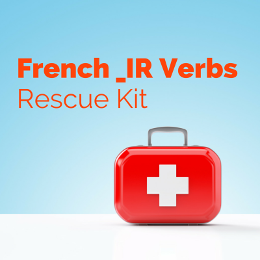 1. Learn the verb endings for the indicative present tense

Note: you need to drop the _”IR” first ! (This is only the mark of the infinitive form)

There are two exceptions (otherwise, learning would not be fun!) :

2. How to Conjugate French verbs in _IR : “finir” and “partir” patterns

Observe these two common French verbs conjugated in the present : 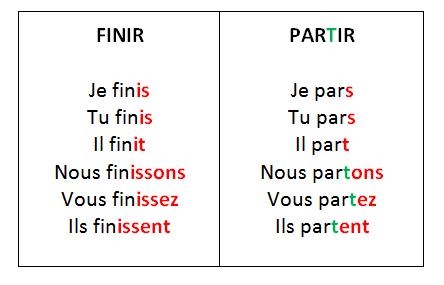 But you will also notice some differences:

– keep the letter “i”
– have an additional double “s” in the plural.
⇒ Verbs that are conjugated on the same pattern as “finir” will therefore end in: _is, _is, _it, _issons, _issez, _issent.

How to tell whether a verb belongs to the “finir” group pattern ??

As a rule of thumb, many of these verbs actually describe the process of becoming (based on a noun or an adjective).

You can also refer to this exhaustive list of verbs.

Note: in French grammar, the _IR verbs conjugated like “finir” are called “les verbes du deuxième groupe”. You may never have heard about this “second group of verbs”, and there’s nothing to worry about : some French grammar is taught differently according to whether it’s addressed to native speakers or to learners of French as a foreign language!

The consonant before the –IR in the infinitive is often dropped in the singular forms (i.e je/tu/il) but reappears in the plural (nous/vous/ils forms).

Note: although we’ve covered the verb endings, many verbs from this group will have an irregular stem when conjugated (eg. mourir, venir, voir, etc.).

3. Past participles of the –IR verbs

The past participles of these verbs end in “_ert” :
ouvert, souffert, offert

Example : J’ai ouvert (I opened), tu as souffert (you suffered), il a offert (he offered)

The past participles of these verbs end in “_u”:
⇒ pu, valu, voulu

The past participles of these verbs will end in “_i “:
⇒ grossi, fini, rougi

The past participles of the other –IR verbs will vary : you have to learn them!

4. How to Conjugate French verbs in _IR : test yourself!

I’ve designed a free downloadable worksheet with exercises (and answers) to put you to the test!
Click here to get it.

I hope this helps! Let me know : what other questions or major pains do you have about French verbs?

This interview is taking you to Ardèche, that (so) beautiful part of France where I used to spend the summer holidays as a child. Meet André Rouy aka « Dédé l’Ardéchois » and discover the history of the train network in Ardèche – the only French département which doesn’t operate any more trains. Dédé and… END_OF_DOCUMENT_TOKEN_TO_BE_REPLACED

By popular demand, I have recorded a series of episodes to help you learn or recognise common French slang expressions. As you may know, the French you learn in the classroom and the French you hear in the street or in the movies can sometimes sound quite different! In this episode we’ll go through some… END_OF_DOCUMENT_TOKEN_TO_BE_REPLACED