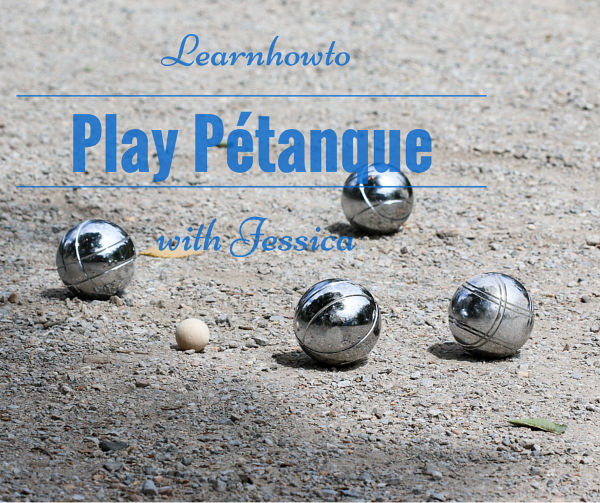 Pétanque (French boules) is the 10th most popular sport in France and is also played by millions of French people for pleasure, especially during summer holidays where tournaments organised in the camping / holiday resorts are very common (I remember enrolling in some “tournois de pétanque” myself as a teenager).

Last July, my husband and I spent a few weeks in France and playing pétanque again revived fond childhood memories. I eventually had a set delivered to Australia – the “boules” are so heavy it would have been a shame to take them back in our luggage as we would have lost some precious weight allowance, much needed for my new French books and the many packets of all my favourite French biscuits!

On our annual picnic in the park last February, I introduced the game of pétanque to my students. The rules of petanque are quick and easy to learn and it was great to see them get so into it, cheering, competing, debating over the score and having a good time!

Pétanque is a century-old game originating from Provence, in the South of France. The name comes from “pieds tanqués”, which means “feet anchored / feet  firmly grounded”. Indeed, in an older version of the game, the ball was thrown after a 3-step run (a bit like in a bowling game). To accommodate one of the players who was suffering from rheumatism and could not run, the rule was changed and all players had to throw the ball with both feet riveted to the ground. Pétanque was born !

They are hollow and made of metal (usually carbon steel or stainless steel). Some sets for children to play on the beach are made of colourful plastic though and filled with sand. (But they suck.)

Competition boules must weigh between 650 and 800 grams and be 70.5 cm to 80 cm in diameter. (Players can have their personal preference, but the choice also depends on the size of their hands or whether they mainly use them for pointing or shooting (I’ll explain that later). 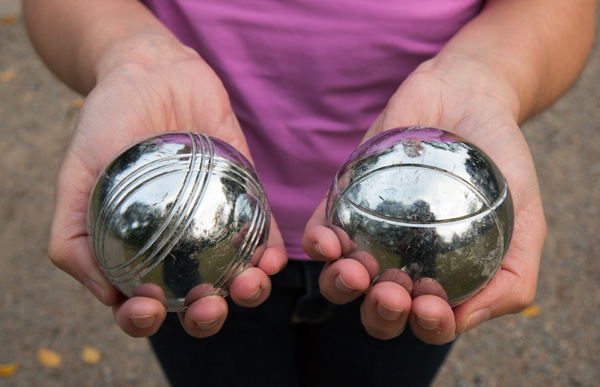 The boules have different patterns on them so we can know whose player they belong to (it’s also possible to have your initials carved on the boule).

The team score points for having their boule(s) the closest to the cochonnet. The cochonnet is therefore what you need to aim at when throwing your boule.

In pétanque, two teams play against each other. The number of boules used for the game depends on the number of players in each team :

Pétanque is best played on small gravel, but can also be played on sand or grass (my least favourite, because then the balls can’t really roll).

It is forbidden to touch or remove any obstacle on the terrain (a pebble, a leaf, a twig, etc). However, it is allowed to fill back an impact hole which has been made by one boule thrown before.

A round ends when both teams have played all of their boules. Pétanque is played in as many rounds needed for the first team to score a total of 13 points.

At the very start of the game, for the first round (“la premiere mène”), we randomly draw which team goes first.

1. The starting team draws a small circle on the floor. (There are also small prefabricated plastic or metal circles that can be bought and used. But usually, tracing a circle with your foot or a stick in the dusty ground works just fine!) 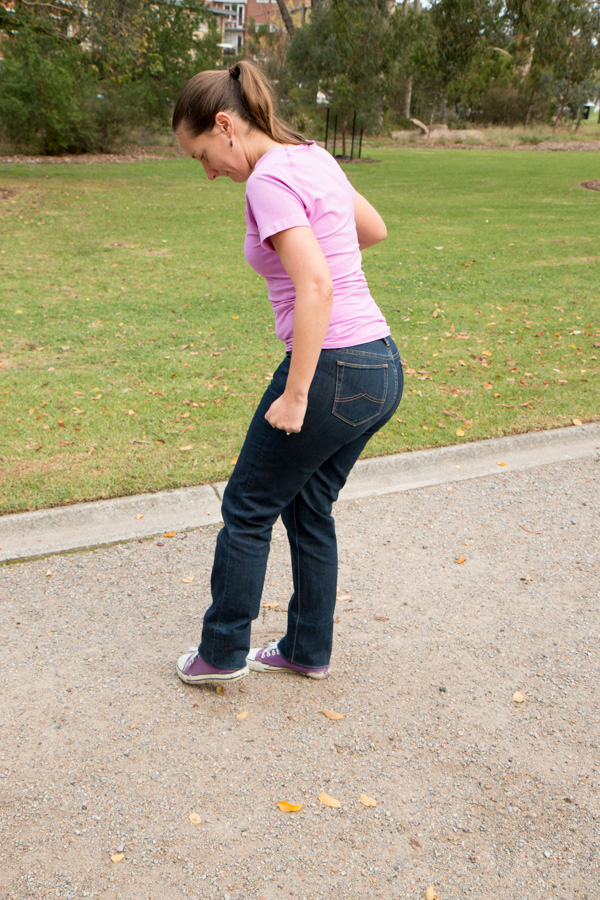 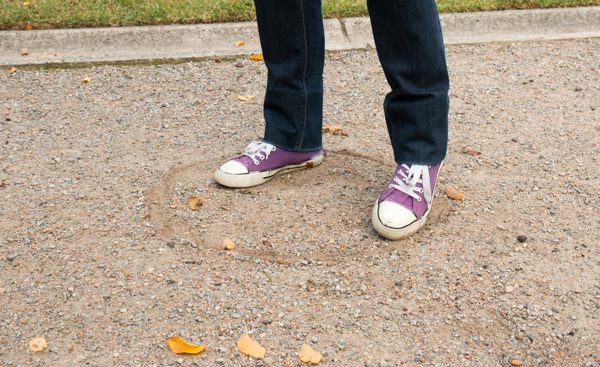 Every player will then have to throw their boules from the circle during that round (in other words, this will be the starting point for all players).

2. The first player throws le cochonnet, which must land anywhere between 6 meters and 10 meters from the starting circle (otherwise it’s too easy / too hard and you need to throw the cochonnet again.)

3. A player from the opposing team throws their first boule, as close to the cochonnet as possible (since that is how you win the game!)

Remember the rule for throwing your boules when playing pétanque:

Both feet need to be within the circle and on the ground. (Therefore, there is no running before throwing the boule!) 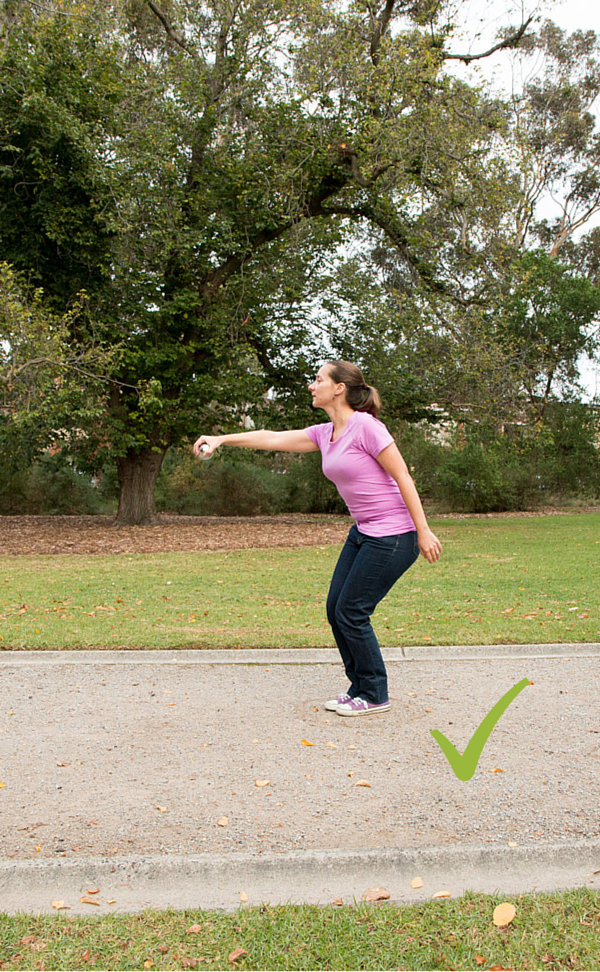 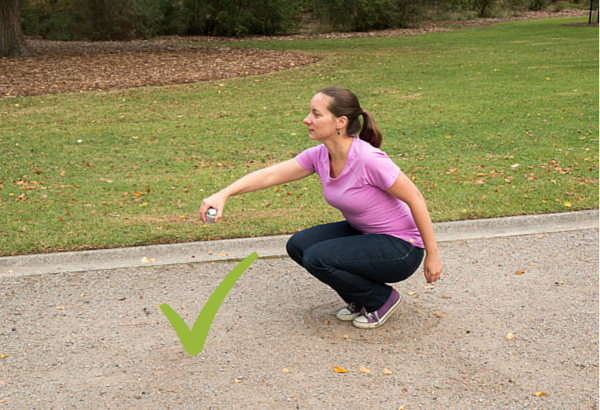 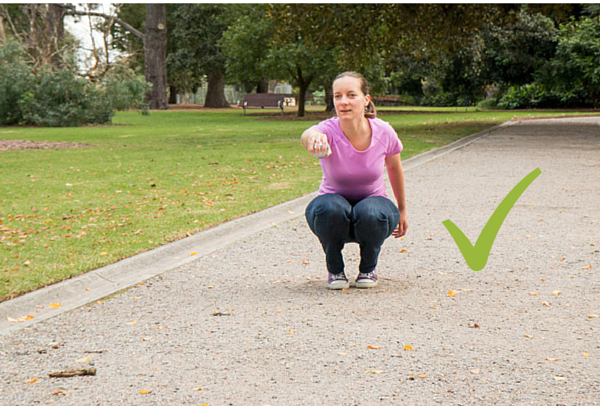 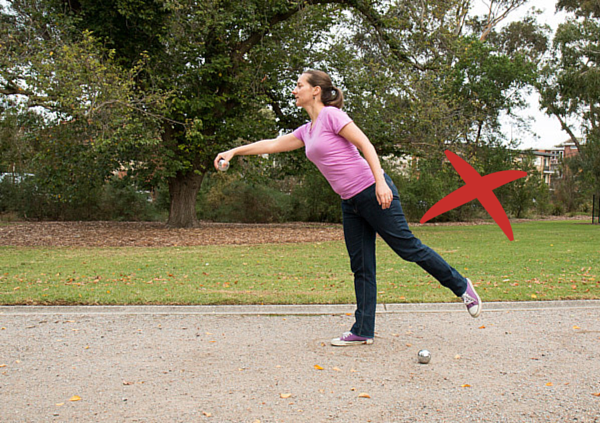 The palm of your hand usually faces down (upper-hand throw), but this is not compulsory. However, throwing this way will allow you to get more control when giving your boule a slight spin. 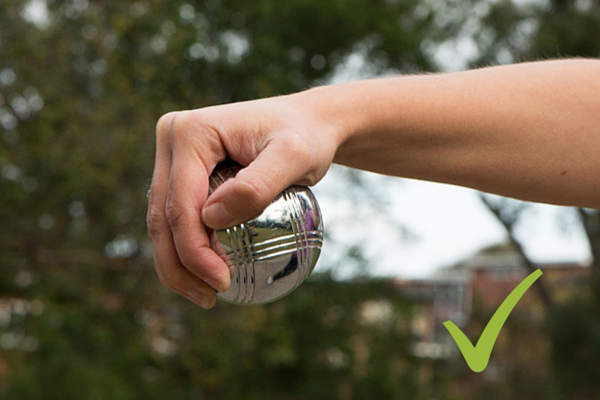 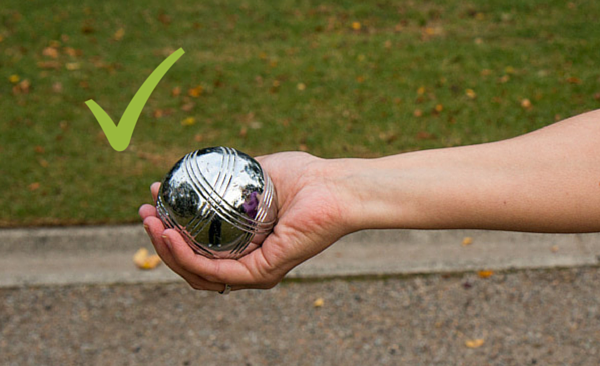 4. The opposing team also throws one boule. This way, we can see who is “having the point”, i.e which team is leading thanks to having their boule closest to the cochonnet.

Sometimes, the boules can look at equal distance from the cochonnet and it can be really tricky to tell which team gets the point. We therefore use a meter, a piece of string or a compass to measure and find out. (In the official rules of petanque, using your feet to measure is forbidden, but many people do it anyway when playing informally.) 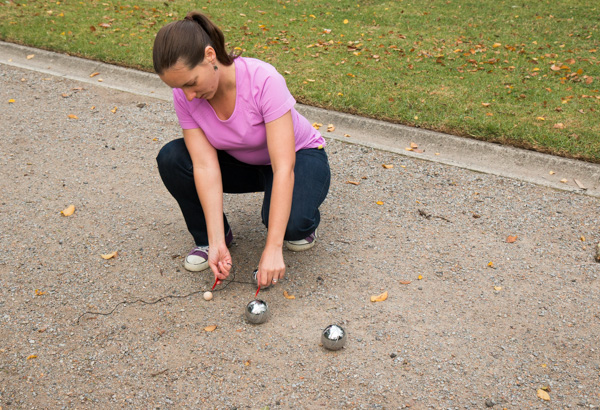 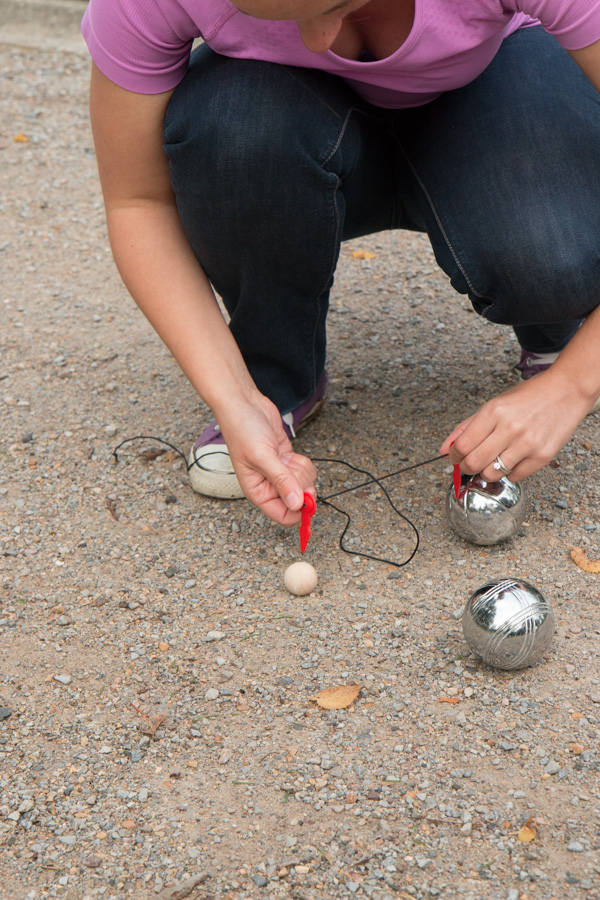 5. The team who does not have the point throws the next boule and continues to do so until they gain the point or run out of boules.

The players within one team can play in any order, depending on whether they require the skills of one of their “pointeurs” or “tireurs”!

6. At the end of an end, the team with the boule closest to the cochonnet scores one point for each of its boules that is closer than the opposing team’s closest boule.

Rules of petanque : how to count the points (example) 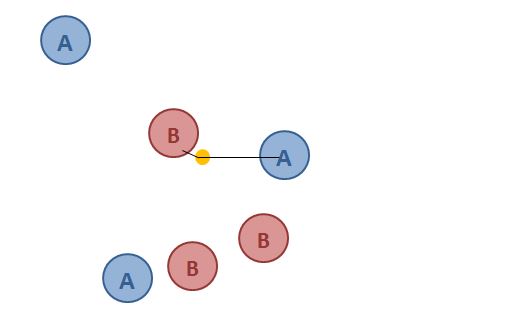 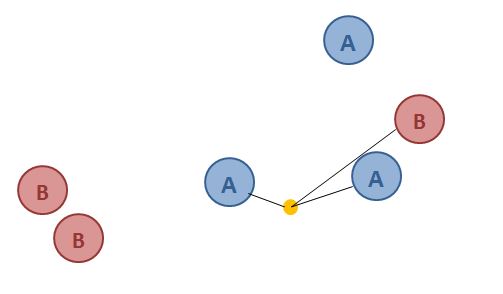 Round 2:
This time, team A wins the round, because the closest boule to the cochonnet is theirs. The second closest boule also belongs to them, but not the third closest. Team A therefore scores 2 points for this round (Team B scores nothing.)

7. The starting circle for the next round is positioned where the cochonnet was on the round that just ended (so we have a new starting point).

8. The game ends when one teams reaches 13 points.

If you’d like to buy your own boules de pétanque from France, check out Obut website (Obut is the most famous brand for quality boules). You can also have them engraved, find a glossary with more pétanque-related vocabulary, read tips on how to choose your boules and hold them properly, etc.

You can also get your set of boules from Amazon here 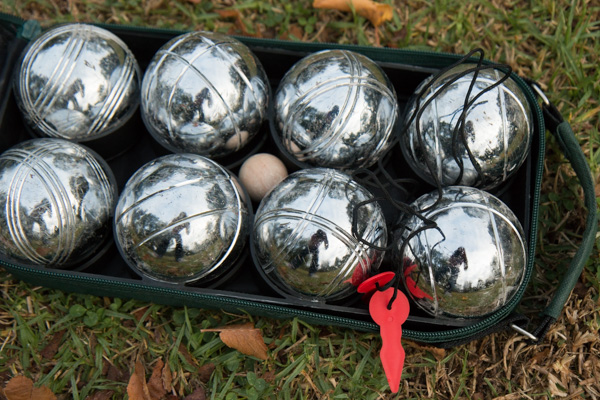 And you, have you played pétanque before? Share your last experience below!

This interview is taking you to Ardèche, that (so) beautiful part of France where I used to spend the summer holidays as a child. Meet André Rouy aka « Dédé l’Ardéchois » and discover the history of the train network in Ardèche – the only French département which doesn’t operate any more trains. Dédé and… END_OF_DOCUMENT_TOKEN_TO_BE_REPLACED

By popular demand, I have recorded a series of episodes to help you learn or recognise common French slang expressions. As you may know, the French you learn in the classroom and the French you hear in the street or in the movies can sometimes sound quite different! In this episode we’ll go through some… END_OF_DOCUMENT_TOKEN_TO_BE_REPLACED