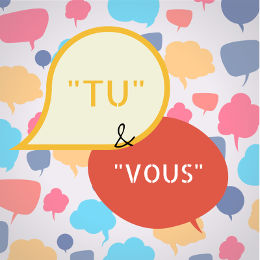 “When can we switch from using vous to using tu with a French person ?” is a very interesting question that I have just recently been asked twice…on the same day! So, I figured that you may also need some light on the matter. 😉

Let’s first recap in which situations people use tu or vous in the French spoken in France (other French-speaking countries/areas can have different rules and use the tu form more easily).

To help you decide between tu or vous, you can check out a very informative flowchart designed by William Alexander and published in the L.A Times (July 12th, 2014)! Here’s a partial screenshot of it, so tu or vous flowchart. 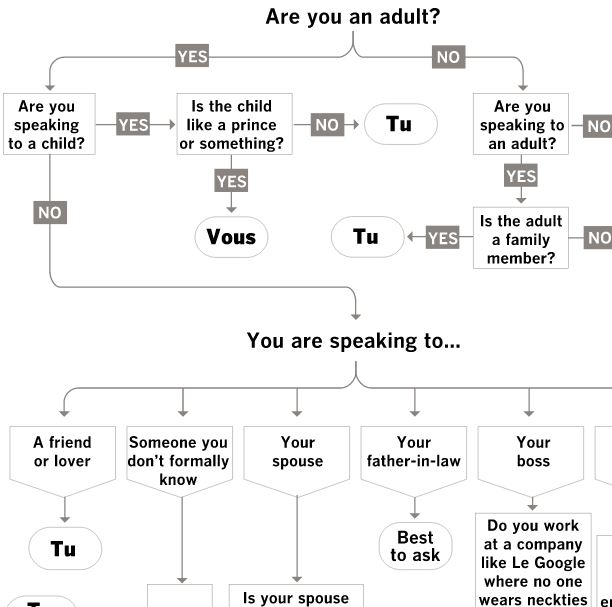 That fun flowchart may make look like the issue is quite complex (and it can be!)
Let me give you my own explanation and views on the question of tu or vous :

Vous shows a respectful distance, deference, not wanting to sound too familiar.

Note that I prefer to talk about “respectful distance” rather than “respect” or “distance” alone (although I always hear people/teachers explain things that way.)
Indeed, using tu doesn’t mean that you’re being disrespectful; it means that you are close and somehow familiar with the person. As I always say, swearing at someone or calling them a pain in the a** using the vous form will not make it sound more respectful !

In theory vs in practice

Rules are not set in stone, and it can be tricky – sometimes awkward- to know which form of address to use, even for French people themselves.
For example, how should you address:

1. Your neighbour, whom you see and greet regularly when you go walk your dog?
2. Your work colleagues, with whom you spend eight hours a day ?
3. Your in-laws, who are kind of family but not directly related ?
4. The other guests and the host of the party your partner has been invited to? (You don’t know these people.)
5. People on internet forums ?

Let’s take the situations listed above, I will briefly comment them :

1. Some people become good friends with their neighbours, others just limit their interactions to greeting (or fighting). Tu is for emotional closeness/proximity, not a physical one. So, use vous until you become friends (if you do!).
2. What’s the ambiance like at your workplace ? How do people address each other? It really depends on your working place and on the ambient feel. Start with vous, just to be sure.
3. It depends. My mum and my grandmother (her mother-in-law) have always addressed each other as vous. But my mum uses tu with my husband and my brother’s girlfriend (and they also use tu with her). Some of my former boyfriends’s parents have also requested that we address each other as tu as early as on our first meeting (along with using their first name). It’s a matter of personality, moral values, desired mark of deference vs making you feel as if you were their own family! Start with vous, and they will let you know what they want.
4. I would use vous and observe how other people address each other. The party/dinner may be very chic/formal or very relaxed. Some hosts may greet you with tu straight away to make you feel at home and it you know that they are cool about being familiar with you.
5. It’s common to see people use tu on the internet, probably because being anonymous removes social barriers more easily. Vous still remains a good option to ensure you’re not offending people.

When in doubt, use vous. You can’t really go wrong! If the other person thinks it sounds too formal, they will invite you to use the tu form.
However, people can be offended if you start with tu and think you are being too familiar. They could say (or think) :
“On n’a pas gardé/élevé les cochons ensemble!” (literally: « We didn’t keep / raise pigs together ! ») or “On n’a pas gardé les vaches ensemble!” (same thing, but with cows!). These expressions can be better translated as: “Since when are we so close?”, “We don’t know each other that well”, “How did we get so friendly?”, “Do I know you?”, etc. Hearing these kind of replies feels a bit like a slap in the face, doesn’t it?

2. How to switch from vous to tu

When can you consider that it would be appropriate to transition from vous to tu as you become more familiar with someone ?

Only the situation, the feel can tell (relationships evolve at their own pace and it’s often a bit tricky to tell, even for French people).

A better question may actually be: How to transition from vous to tu ?

You need to ask, be given or give permission to do so. (It’s probably better for you to wait until you are given permission.)
There are actually dedicated terms in French for “addressing someone as tu/vous:

These verbs can also be used as reflexive verbs with a reciprocal meaning:

Giving permission to use tu :

When someone gives you permission to use the familiar form of address tu, they may say:

In order to avoid using tu or vous in the question since this request really is an “in-between state”, we often use on (more rarely nous, which makes the sentence unnecessarily longer and “heavier”):

Asking for permission to use tu :

To suggest using the tu form / To ask for permission, you may say :

It’s likely that people will agree to switching to the informal tu form of address. Nevertheless, you might come across someone who will reply :

The person may be the type who just prefers to use the vous form. Or they may think that is too early, or inappropriate (because of your respective status, eg. employer/employee), or that it feels weird. Don’t take it too personally if that happens!

Asking which form to use in ambiguous situations:

When you meet someone for the first time and have a doubt about which form to use, you may ask:

(Alternatively, simply use vous as I already said before.)

After living for some years in English-speaking countries where there are no tu/vous forms but only a you has allowed me to feel more comfortable approaching and talking to strangers as it reduces the social barriers created by the use of language. This now has a direct influence on the way I address strangers in French: I still use the vous form but I rub off some of the distance by allowing myself to call them by their first name instead of “Monsieur/Madame (+family name)”. A good compromise!

Have you experienced awkward situations related to forms of address in French? Do you have examples of people you have first addressed as vous then tu? How/When did that transition happen? Share your experience below!

This interview is taking you to Ardèche, that (so) beautiful part of France where I used to spend the summer holidays as a child. Meet André Rouy aka « Dédé l’Ardéchois » and discover the history of the train network in Ardèche – the only French département which doesn’t operate any more trains. Dédé and… END_OF_DOCUMENT_TOKEN_TO_BE_REPLACED

By popular demand, I have recorded a series of episodes to help you learn or recognise common French slang expressions. As you may know, the French you learn in the classroom and the French you hear in the street or in the movies can sometimes sound quite different! In this episode we’ll go through some… END_OF_DOCUMENT_TOKEN_TO_BE_REPLACED