I recently received a very interesting and unusual question that I had never been asked before. As the answer covers a few different areas, I was immediately inspired to write an article and share it with you. Thanks a lot Tish for your question!

“I understand that animals are generally masculine and feminine (eg. une girafe) but if I am talking about a male girafe, can I say ‘un girafe’? Imagine that I am writing a story with my children about ‘une coccinelle’ but the ‘coccinelle’ is a male whose name is Bruce. Do I refer to this ‘coccinelle’ throughout the story as ‘il’ or ‘elle’?
I even get confused when referring to my dogs. One is male and the other is female but I still call my female dog ‘mon chien’ and if I had a female cat I wouldn’t dare call it ‘ma chatte’ at the risk of being rude.
I’d love your insight on this!!!”

Note About the Word “Animal”

Before we start, please note that the word “animal” can either be a noun or an adjective.

For explanations about the irregular plural forms of this word (and other words ending in “_al” such as in “animal”) in French, check out my article here.

Generic Names of Animals: Either Masculine or Feminine

Like all nouns, animal names are strictly masculine or feminine when they refer to the generic name of the species.

We cannot change the gender of these nouns and say « un girafe » to refer to a male giraffe or call a femelle monkey « une singe ».

There are actually three ways of doing this, but first we must wonder how relevant it is to specify the gender of the animal.

It is often not important to specify the sex of the animal (see the first sentence of each example, sentence a). It becomes relevant when we want to describe a specific behaviour in the male or female individual of the species (such as in sentence b of each of the above examples).

The article “Le Jeu de la Séduction Chez les Animaux » (“Animal Courtship Behaviours”) is an interesting read for you if you have an intermediate or advanced level of French. It shows typical male and female behavious during the mating dance and as such, it is a good example of the ways to differentiate the males and the females in each species.

If you have a cat or a dog, you will also tend to use the generic name « chat » or « chien » (both masculine words) and therefore not systematically specify when your pet friend is a female. It’s the same as in English; you say : “This is my dog”, not “This is my female dog.”
« Mon chat / Mon chien est malade » (= My cat / dog is sick.)
→ Your pet could be male or female; it is unspecified. 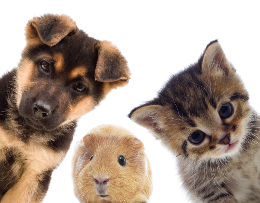 But you can also say :
« Je préfère ne pas laisser sortir ma chatte / ma chienne pour ne pas qu’elle rencontre d’autres chats / chiens. » (I’d rather not let my female cat / dog out so that they don’t meet/interact with other cats/dogs. »
→ You could still have used the generic, masculine noun. Using the feminine form makes it more apparent that your reason/concern is that you don’t want your cat / dog to get pregnant because it is a female (therefore it is relevant to give this precision).

So, if you are worried about people with a dirty mind, my advice would be not using them, or at least not using them along with a possessive article (i.e “my”, “your”, etc) in order to avoid an awkward/unfortunate combination.
For example, instead of saying: “Ma chatte est très affectueuse” (“My female cat is very affectionate”), you can split the sentence so that “ma” and “chatte” don’t show up side by side : “Mon chat est très affectueux. C’est une chatte / C’est une femelle.” (My cat is very affectionate. It’s a female cat.)

The Three Ways to Refer to the Gender of Animals

We’ve already come across two of these ways in the above examples, have you noticed? So, if you do want to be specific about the gender of the animal, your options are:

1. Feminine forms based on the masculine

Common animal names have both a masculine and a feminine form. The latter is derived from the masculine form in the usual/typical way (like many adjectives, or names of occupation for instance), i.e simply by adding an “_e” for the feminine (and sometimes doubling the last consonant)

2. Distinct use of words

Some animals have specific, distinctive names to describe either the male or the female individual:

You will find this in English too: a sheep is the generic name (called “mouton” in French) ; the male can be called a ram (“bélier”) and the female an ewe (“brebis”). Cheese made from this animal is called “fromage au lait de 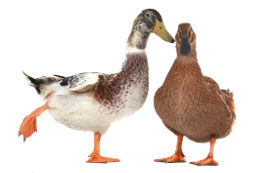 Notice: The generic name is strictly either masculine or feminine, as mentioned at the start of this article. However, specific names referring to males will all be masculine and specific names related to female will all be feminine (this is the same for people, with names of occupations and family members).
Check this website for a much longer list of animal names in French ; it tells you what the male, female, young, habitat, group, cry etc. are called as well. A goldmine for your animal-related vocab!

When there is no existing feminine form or separate word, that is to say most of the time, simply use the adjective “mâle” or “femelle” to indicate the gender of the animal.
Note: because these words are adjectives, make sure they come after the noun in French and not before.
Ex: une girafe mâle / femelle, une mante religieuse mâle/femelle, etc

Beware !
Even after some years living in Australia, I’m still shocked / offended when I read “Male/Female” on the door of public toilets. That comes from the fact that in French, the words “mâle” et “femelle” are almost exclusively used to refer to animals. In fact, the word “femelle” used to describe a female human being in French has a degrading, sexual connotation. My mind simply cannot adjust to it! I therefore prefer “Men/Women”, “Gents/Ladies”, or even no words: the pictograms are self-explanatory enough! 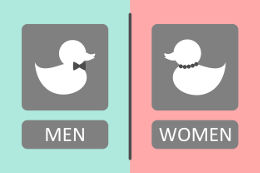 Remember:
Nouns being either masculine or feminine in French, they are referred to “il” or “elle” (“he” or “she”) even when they are not people.

”, a series of books for 2 to 6 year old children by French author and illustrator Antoon Krings. This collection of stories/tales has become a classic in youth literature and tells the adventures of cute animals such as: Belle la Coccinelle

, etc. (These books are also available with audio CDs 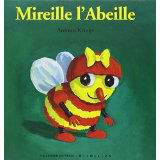 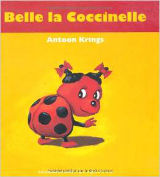 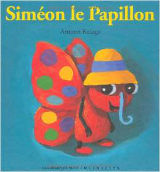 But, what happens if we want to write a story featuring a male ladybug (“coccinelle”, feminine) called Bruce?

Let’s write the first words of the story : “Bruce is a ladybug. It has seven black dots.”
→ I can either write:
1. “Bruce est une coccinelle. Il (= meaning “Bruce”) a sept points noirs.”
Or:
2. “Bruce est une coccinelle. Elle (= meaning “that ladybug”) a sept points noirs.”
Both ways are actually possible depending on what part of the sentence we refer to. It would be better to use the first sentence though because we are mainly talking about the character of the story, a boy. Referring to this person/character makes more sense and will limit inconsistencies.

Let’s keep writing. “Bruce loves gardens. He particularly enjoys the scent of strawberries”
→“Bruce adore les jardins. Il aime particulièrement le parfum des fraises.”
We can only use the masculine form here because « Bruce » is the only referent in the sentence. In English, we will also use “he” to refer to Bruce, as a person.

Now, imagine that a little boy who was playing in the garden spots Bruce. The boy exclaims: “Oh, a ladybug! It’s beautiful!”
→“Oh, une coccinelle ! Elle est belle! »
We can only use the feminine form here because « coccinelle » is the only referent in the sentence. In English, we are back to using “it”, to refer to a simple ladybug, not a person.
Now, feel free to continue Bruce’s story in the comment section below! 😉

” books links of this article are affiliate links.

This interview is taking you to Ardèche, that (so) beautiful part of France where I used to spend the summer holidays as a child. Meet André Rouy aka « Dédé l’Ardéchois » and discover the history of the train network in Ardèche – the only French département which doesn’t operate any more trains. Dédé and… END_OF_DOCUMENT_TOKEN_TO_BE_REPLACED

By popular demand, I have recorded a series of episodes to help you learn or recognise common French slang expressions. As you may know, the French you learn in the classroom and the French you hear in the street or in the movies can sometimes sound quite different! In this episode we’ll go through some… END_OF_DOCUMENT_TOKEN_TO_BE_REPLACED