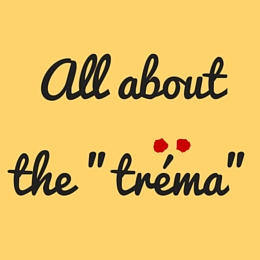 This article is the second of a three-part series from a question submitted by Oska. Also read :

Have a look at the tréma ID card! (I’ll explain the “acts as a crown” function in the next section, keep reading.) 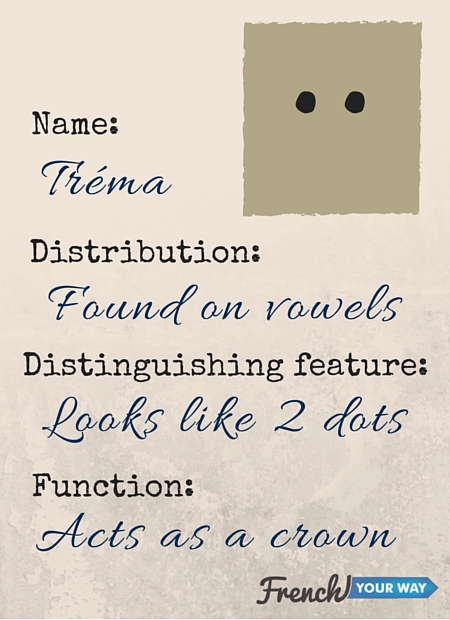 The tréma changes the pronunciation of French words. If you know your basic French phonetics/reading rules, you know that:

Well, my tip for you is to think of the tréma as a crown: the letter “wearing the crown” sees itself as unique and doesn’t want to mix/ to be blended with its neighbours!
The tréma therefore indicates that you need to pronounce the letter under it as well as the letter before and after it separately (you will even need to sound the last letter if it follows the tréma).
Example:
The word “mais” (=”but”) is pronounced [mɛ].
The word “maïs” (= “corn”, which reminds me that I do have some corn in the fridge for tonight!)] is pronounced [mais] since you sound the A, the Ï and the S separately.

Click here to listen to me reading the examples above as well as the following words (but maybe you can try to read them yourself first!):
Anaïs (a girl’s name), astéroïde (= asteroid), aïe! (= ouch!), Noël (=Christmas), Citroën, cocaïne

If we simply added an “_E” for the feminine, the letter “U” would not be sounded anymore as it would blend with the “G” to form the [g] sound. So, we will use a tréma, but surprisingly, it will be placed above the letter “E” – not the letter “U” as one might expect it to be.
So, here’s the spelling for these adjectives, in the feminine form (pronunciation is identical to the masculine form):
Ambiguë, contiguë, exiguë.

« Haïr » (= to hate) is the only verb that will keep its tréma when conjugated, except for the indicative present singular forms (je, tu, il, elle, on):
Je hais
Tu hais
Il/Elle hait
Nous haïssons
Vous haïssez
Ils/Elles haïssent
Click here to listen to me reading the conjugation of “haïr”!

I hope this helps! Let me know if you have any question.
By the way, I do have a question for you: have you subscribed to my awesome monthly newsletter yet? 🙂 If not, you can do it right at the bottom of this article! (or click here)

In the next episode, I’ll tell you all I know about the “œ” (ligature)!

Natacha is a young Frenchwoman qui “a la patate” and a contagious passion for improvised play. She’s the founder, coach, and one of the improvisers / actresses of The French Loop, a theatre company based in Melbourne. (If you also live in the area and would love to practice your French and have a go,… END_OF_DOCUMENT_TOKEN_TO_BE_REPLACED

I received the following question from Jane: Hi Jessica, I am new to your podcasts but hoping to work my way through them slowly as I study French. I am very much enjoying them. I have just listened to episode 6 (FYW 006 : “To demand” vs “Demander”: ) and have a question about agreement… END_OF_DOCUMENT_TOKEN_TO_BE_REPLACED