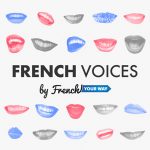 Gilles Malezieux worked at the Louvre Museum for 25 years and allows you to have a peep inside the life of the largest and most famous museum in the world. We’ll talk about why the Mona Lisa (“La Joconde”, in French!) is so famous, the hidden passages of the Louvre as well as some stories… END_OF_DOCUMENT_TOKEN_TO_BE_REPLACED

What is the difference between “Bonne chance” and “Bon courage” in French? Can they be used interchangeably? Find out in this episode and learn a few more common French expressions to wish someone well! This episode was inspired by a question from Joan. If you also have a question about the French language or French… END_OF_DOCUMENT_TOKEN_TO_BE_REPLACED